How to Create a Ladybird without Using the Pen Tool

DesignTips > > How to Create a Ladybird without Using the Pen Tool 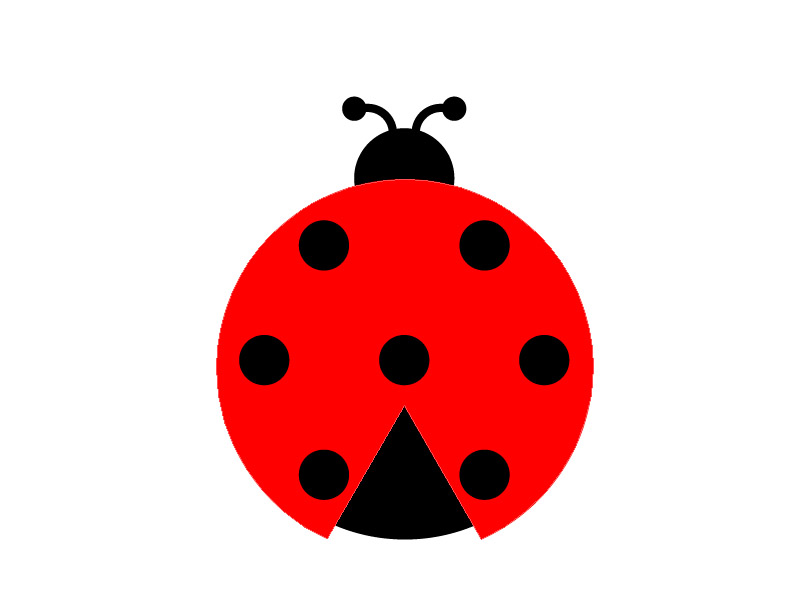 In this section we will introduce you how to create a ladybird without using the Pen Tool. A ladybird illustration is often associated with a clover illustration.

A ladybird reminds us of spring, happiness and breeziness. It is commonly used for postcards, artworks, etc.

We can create such a cute ladybird very easily without using the Pen Tool. Please try.

Step01 Create the Head and the Body of the Ladybird

Using the example above, create the head and the body of the ladybird with two precise circles.  Put the two circles together to meet the two midpoints of the circles like the right image above.

Create the wings by copying the body part of the ladybird.

Create a new layer, copy the body object (Ctrl + C), and paste it on the new layer (Ctrl + F). This becomes the wings of the ladybird, change the color into red.

* You can paste (Ctrl + C) -> (Ctrl + F) the object over the original circle without changing its place. 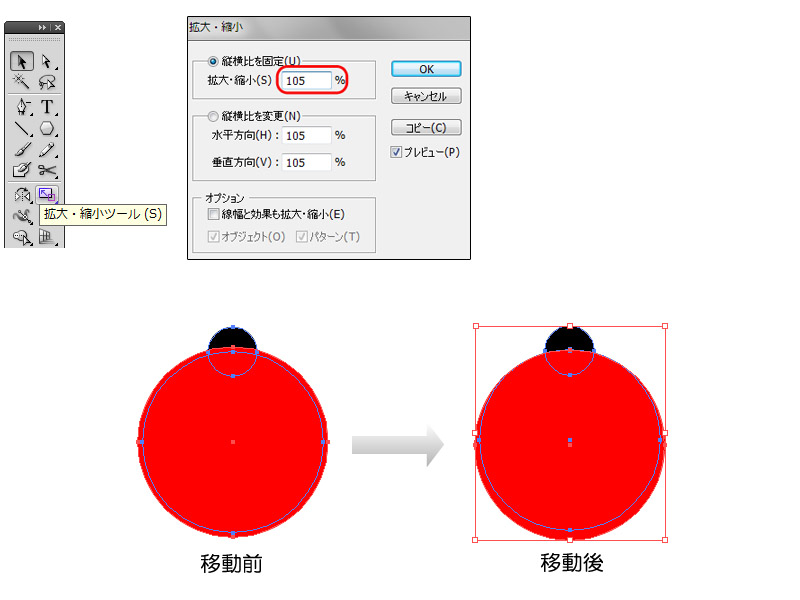 Enlarge the wings we have created in Step02 with the [Scale Tool]. Set the preference as shown above, and slightly slide down the enlarged wings so that the head shows more.

Create a triangle using the [Polygon Tool] with the value shows above. [with fill, outlined]

Place the triangle slightly below the vertical midpoint of the wings.

Step05 Finishing up the Wings 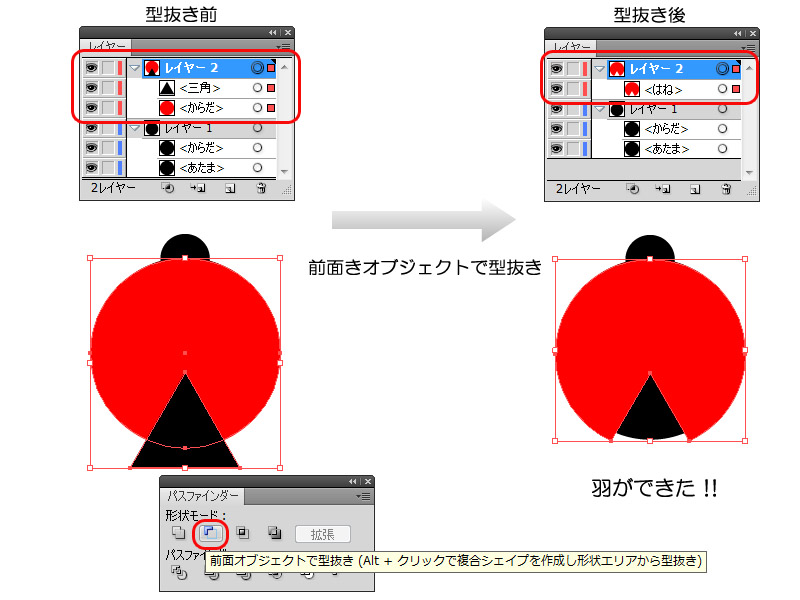 Step06 Create Round Patterns of the Ladybird

Create a new layer, draw a circle with the value above and place it at the midpoint. 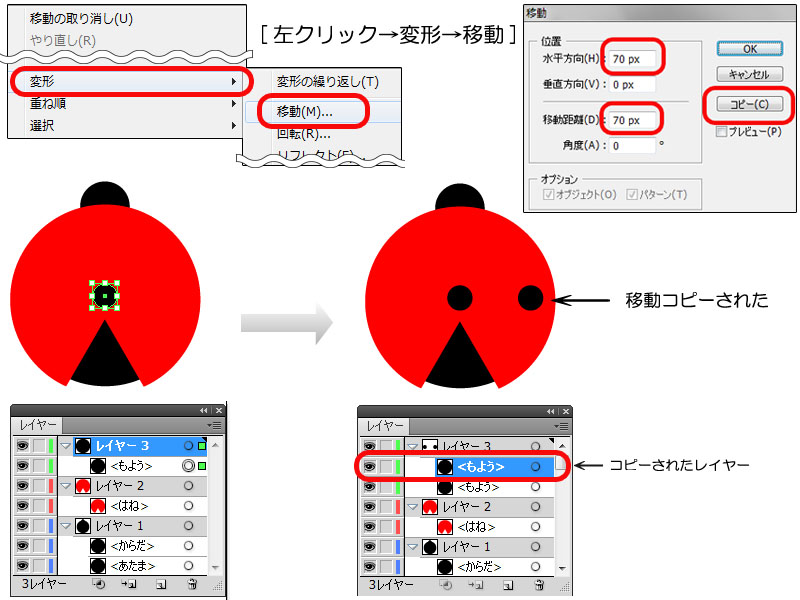 You could copy the pattern with (Alt + Drag), this time we use the “Move Tool”.

Select the pattern circle, copy it to the right [Left Click -> Transform -> Move].

Step08 Copy it to the Upper Right 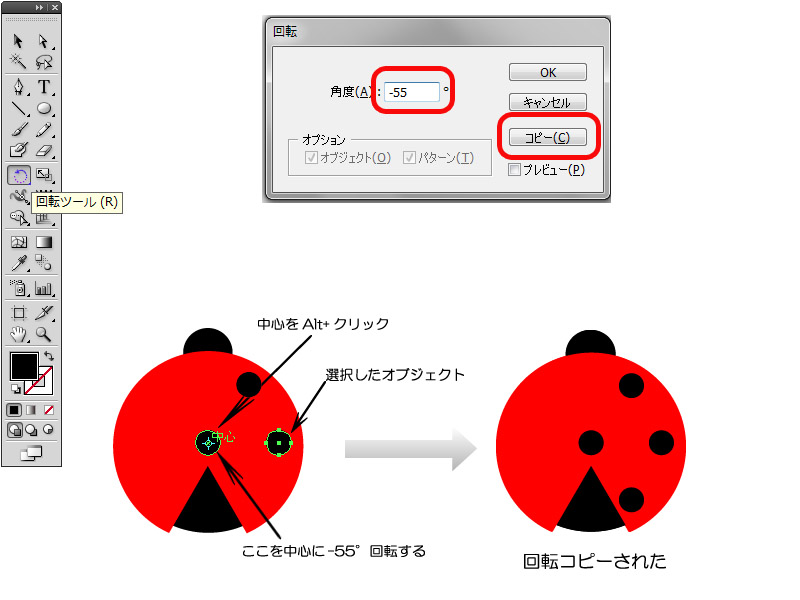 Select the circle we have moved in Step07. Click the [Twirl Tool] and set the value of the midpoint (Alt + Click).

The circles in Step07 are copied twirlingly around the clicked point. Next, we change the value to -55 and copy the circles below.

Step09 Put Patterns on the Left

You have patterns on the right side, now you copy the mirror of it on the left.

Keep selecting the patterns on the right side, select [Reflect Tool], and copy the midpoint of the middle circle (Alt + Click).Copy them reversely with the preference shown above.

Open a new layer, create a rectangle using the [Rectangle Tool] with the value above. Curve it with [Effect -> Warp -> Arc] and divide the appearance.

Step11 Create the Tip of the Antenna 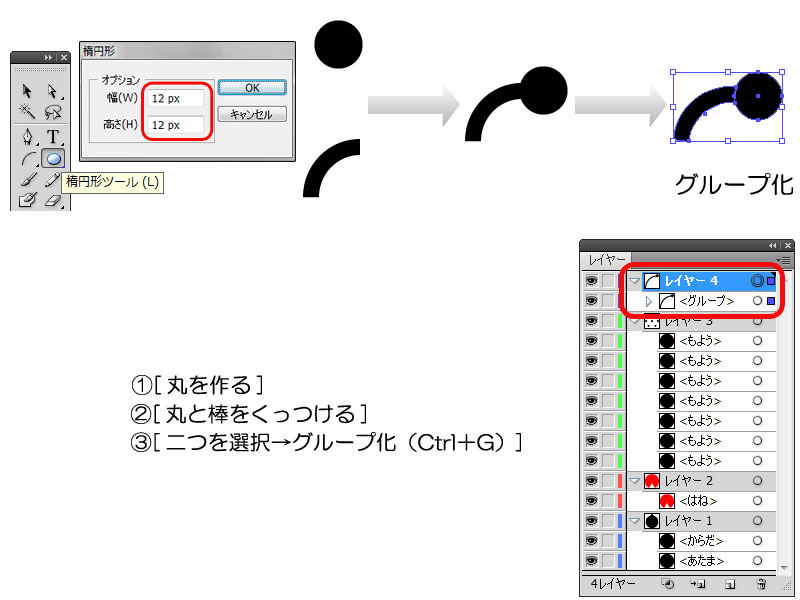 Draw a precise circle using the [Eclipse Tool], stick the antenna and the circle without a gap. Group them (Ctrl + G).

Step12 Put the Antenna on the Head 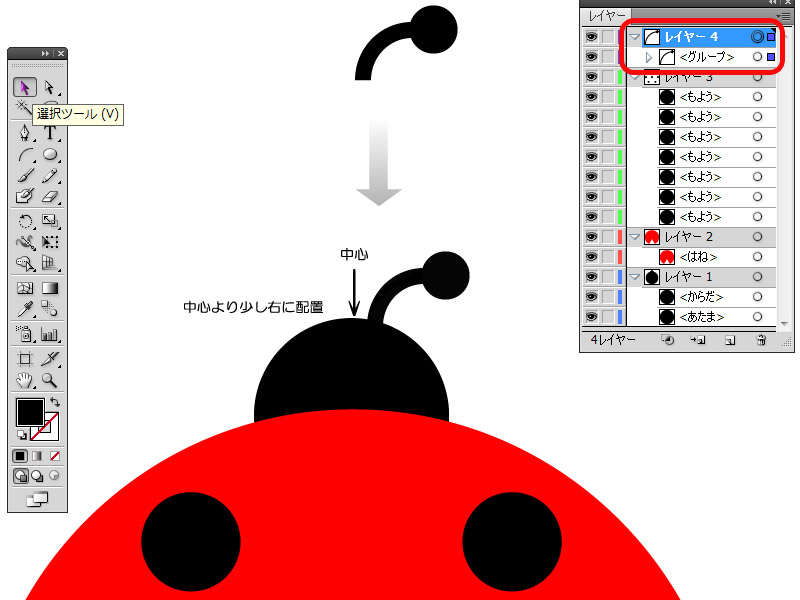 Put the antenna on the right side of the head without making a gap.

Step13 Create the Antenna on the Other Side 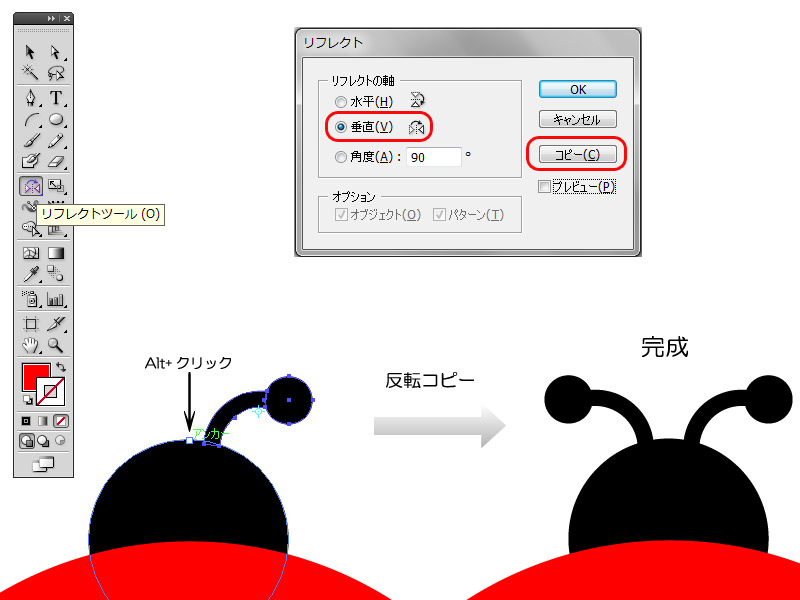 Copy the antenna reversely like in Step09. Now you have the antennas of the ladybird.

Step14 Finish Up the Illustration by Unionizing the Whole 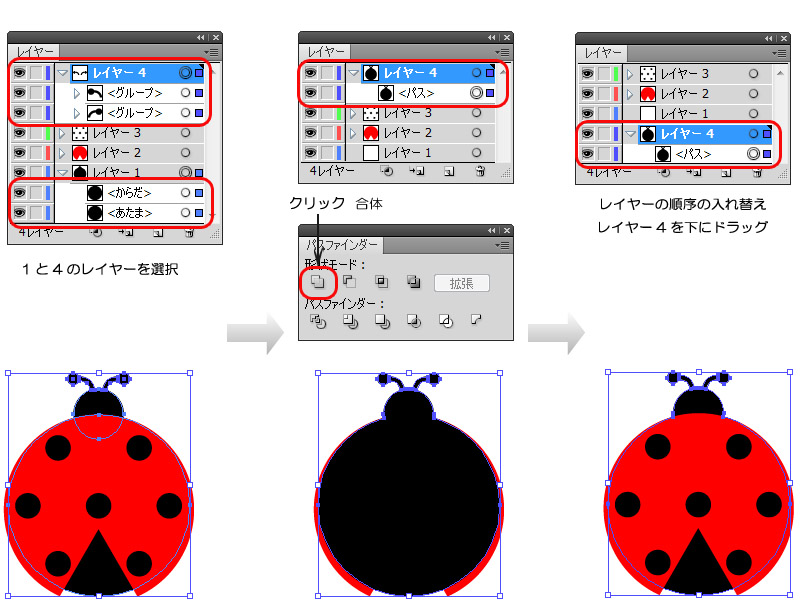 Make the head, the body, and the antennas one object. Select the layer 1 and 2, click [Pathfinder -> Shape Mode -> Union].

Move the layer of the unionized object to the most bottom of the layers.

Now we have a ladybird illustration. You can create this cute illustration almost only by using the [Ellipse Tool].

This time we only used the “shape tools” to create the ladybird illustration so I tried to include other tools for practice purposes. You could move an object with (Alt + Drag) but we used [Twirl/Move/Reflect Tool] in this tutorial.

You could arrange this illustration by adding a rainbow and a clover to make a postcard.